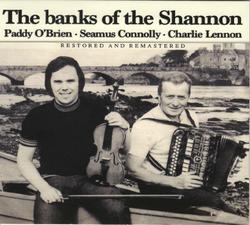 The banks of the Shannon (CD)

There are a fair few legendary recordings of Irish music out there and one of them is “The Banks of the Shannon,” by Paddy O’Brien (button accordion), Seamus Connolly (fiddle), and Charlie Lennon (piano). If you’ve listened to it, you’ve doubtlessly felt the electric chemistry these three players share and understand why the recording is so highly rated by musicians and fans alike. It is fabulous news, then, that Comhaltas Ceoltóirí Éireann, who gave it its original release in 1973, has elected to restore and reissue this highly influential recording, improved by the fact that they’ve done it in such outstanding style. Daniel Neely The Irish Echo newspaper N.Y.