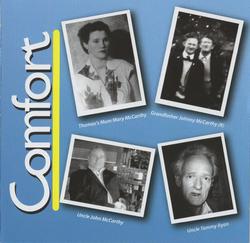 Thomas McCarthy is a member of a well-known musical Irish Traveller family, born in Birr Co. Offally, he has spent most of his life in England. Thomas’s grandfather was a renowned seanachie. Lets have a listen to what Comfort has to offer, Thomas McCarthy is a very special, and splendid, singer. I've often praised good traditional singers for the way that they can effectively communicate the emotional aspects of the story, and keep the listener's attention, without resorting to any obvious musical ploys. Some other singers do use obvious musical ploys - and they seem to do so more in Ireland. Thomas is clearly one of these and, beyond the extensive use of decorations, he both shortens and lengthens lines, varies the melody considerably, and often almost swallows words. This is not the place to try to describe his methods more fully, but they clearly work; at a Bristol gig I attended, he sang and chatted to an en-raptured audience for two and a half hours without a break. Green Brooms: is a great song to start with as it's fairly well-known, and you'll get a clear idea of what Thomas does with his songs.
Bridget Molloy: is not one you'll know, I would guess, but it has nice simple tune, and I think you'll be able to hear many of the ploys I mentioned above. The same may be said of the next two tracks, The Maid of Lismore and Lord Lovett - plenty of his strategies on show here. The remainder of the CD is songs unlikely to have been heard before, so I'll give you the Notes about them, in Thomas's own words. Moyasta Shore: McGrath is the hero of the song, a lone Irishman who fights against British forces under Lord Balfour's rule, who have invaded the land worked by his ancestors to enforce an illegal land grab. It is Irish in origin and a song of resistance, of McGrath refusing to leave his land and be dominated by what are referred contemptuously as "English curs" and an unjust British government. Heaven Borne Valiant Souls: "To draw Erin's sword and aim it at the lion's paw." An elegiac song of rebellion and the fight for freedom of the Irish people in 1798. The song pays tribute to those who gave their lives and promises redemption, whilst leaving the listener with an element of hope for the future. Johnny Carey: A local beauty Molly is forbidden to marry. She suggests they elope ("won't you follow me") when her father suddenly dies (not from drinking water...) and Molly inherits - but she herself falls ill. Lonely Now Your Gone: A song of unrequited love held by a man of the town for a Traveller girl, he only catches a fleeting glimpse of her and will not rest until he finds her again. Margaret Garrity: This song has been handed down through the McCarthy family of Virginia, USA via Honest Tom McCarthy, a great grandfather of mine. It tells the story of a crime of passion - a woman who murdered her vengeful and unfaithful lover, who had married another. Due to the respect with which she was regarded by her community, and his disgraceful breach of promise, she felt she had no option but to reclaim her honour. Having given herself up she was acquitted and released to great celebration. Finally Paddy McInerey: A song about a man from the North of Ireland who went around looking for a wife. He found one in the County Cork and you can tell how his life goes in the song. It was a secret song that got out to the country people - certain songs were supposed to be secret but it got out and circulated everywhere. Deafear Productions