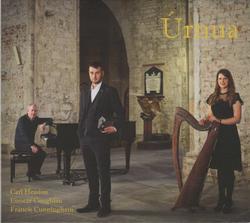 Carl Hession is regarded as one of the foremost piano accompanists and orchestral arrangers in Irish Music. This album showcases Carl as one of the finest composers in Irish Traditional Music. Eimear and Francis from Tulla and Crusheen in Co. Clare, have been playing music together since the age of 15. Also a fiddle player, Eimear learned her music from her grandfather Paddy Canny and studied harp with Janet Harbison. West Limerick concertina player Tim Collins taught Francis from an early age. Individually and together they have won numerous acolades at Fleadhanna over the past few years.

Two of the finest exponents of concertina and harp with a strong emphasis on the Clare tradition in which they are steeped. I was so excited when I first got wind that Carl was collaborating with Francis and Eimear on a recording made up solely of Hession compositions. Stylistically and instrumentally they’re a great fit and this gem of a recording is testimony to that. And the bloom of youth and the experienced master making music across the generations.