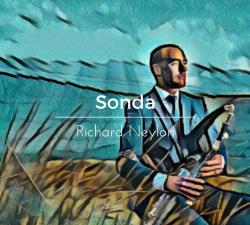 This is a beautiful album with superb piping from Richard, a proud Galway man. His dad Des, grew up listening to the music of some of the greatest exponents of the tradition in Mullagh, Co. Clare, so its no surprise that Richard’s strong ties to the music tradition of West Clare shines through.

The title of the album Sonda, is the Irish word for sonant or sonorous; meaning a voiced sound. This word has a special meaning when used to describe the uilleann pipes, where the melody is played on the chanter. Chanter comes from the Latin word cantātōr, meaning to sing.