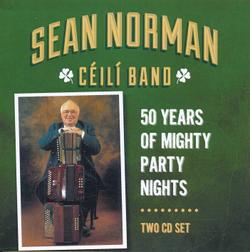 The Sean Norman Céili Band owes much to a great number of people. Sean says, I got my ﬁrst big break in enjoying Irish traditional music through the wonderful Marie Tyrrell and her band. Having formed my own band in 1965 over one hundred musicians have performed with me over the last ﬁve decades. Many have gone to their eternal rest and have left a legacy of memories of great times in places as far apart as the Town Hall in Edenderry and Fairﬁeld, Connecticut USA. Tom Moran (piano), Maura Connolly (ﬁddle), Kevin Nolan (vocals) Jack Donoghue (tin whistle), Ben Nolan (piano accordion), Michael Dirt Hynes, (drums), Joe Connolly guitar and vocals together with myself on the accordion started something in the 19605 that we could never have imagined would still be rolling out CD5 50 years later. Since then countless men and women have graced the stage -with us.

Seán Norman brought his career of over 50 years as band leader of The Seán Norman Céilí Band to a close at Fleadh Cheoil na hÉireann 2016 in Ennis. His final Céilí was a Fíor Céilí and determined not to change the habit of a lifetime, he had one mighty party afterwards. We all wish Seán a very happy retirement from the band, but he will no doubt grace many a stage as a musician in the years ahead with his unique style of music and wit.

This double CD, Sean Norman Céilí Band Celebrating 50 Years Of Mighty Party Nights is sure to become a collectors item in a very short time, it has everything from Reels and Jigs to Waltzes, Barn Dances, Military Two Steps, Songs and Recitations. Céilí Band music at its best, enjoy.